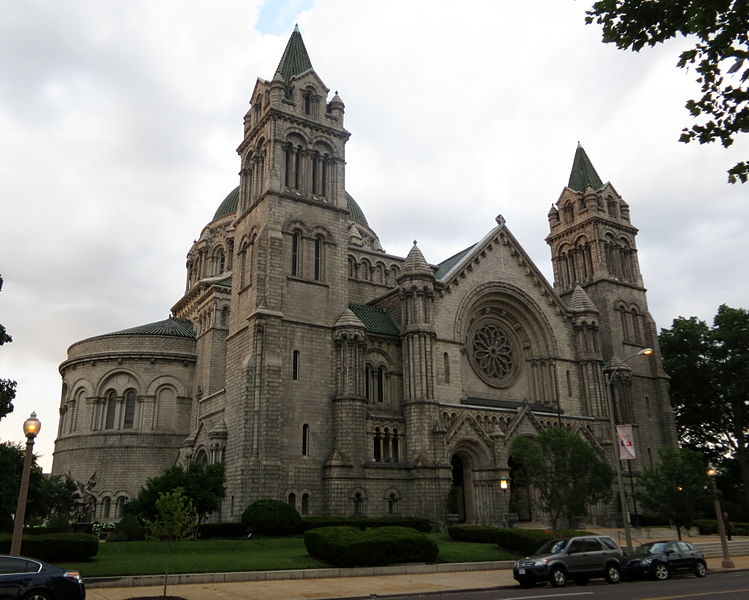 The Saint Louis Cathedral belongs to the popular Roman Catholic Church and located at 4431 Lindell Boulevard, St. Louis, MO 63108, United States. This church was completed in 1914. The Archdiocese of St. Louis considers it the mother church and seat of its archbishop, Mitchell T. Rozanski. Its architects include Barnett, Haynes & Barnett. The Cathedral was constructed to replace the Cathedral of St. Louis that previously served the area along the Mississippi River and is named for St. Louis. Pope John Paul II designated it a basilica in 1997. While workers started clearing ground in readiness for construction in May 1907, it was not until October 1914 that its dedication and first mass took place. This was after the superstructure was complete. In June 1926, the consecration of the church occurred, which was more than a decade later. The church is popular for its large and conspicuous mosaic installation, one of the most admirable in the entire Western Hemisphere. To promote racial harmony, the church also has burial crypts and an outdoor sculpture.

History of the Cathedral

Archbishop Peter Richard Kenrick authorized the planning for the construction of the cathedral in the 1870s and 1880s and Archbishop John Joseph Kain created the fund for the planning and construction of the building. In April 1871, they created a formal organization to promote the new cathedral and Bishop Patrick John Ryan, Archbishop Kenrick, and various local businessmen were part of the team put together to form the Saint Louis Cathedral Building Association. Initial site survey showed that the new cathedral would be constructed on a city block, which would be bounded 22nd and 23rd streets as well as Chestnut and Pine Streets, east of the construction site.

However, it was not until the elevation of Archbishop John J. Glennon that the initiative for the construction began. Barnett, Haynes & Barnett is the architecture firm that was selected to complete the project and Thomas P. Barnett was the project supervisor, as he led the team in the design of the construction works. The groundbreaking ceremony for the site was carried out in May 1907 and the building’s cornerstone was formally laid in October 1908 and by 1914, the majority of the building was ready for a dedicated ceremony, but the full consecration never took place until June 1926. However, even after consecration, they did not manage to complete the cathedral’s mosaics until 1988.

Museum and Tours at Cathedral Bassilica

A tour of the cathedral lets you learn more about its rich history, transcendent art, and inspiring architecture. This is a unique work of art with lofty vaults and eye-catching mosaics. Concepts and works of a dozen artisans and architects have been assembled in a perfectly-integrated and coordinated whole. The Cathedral Basilica will draw your thoughts and emotions as you contemplate something transcendent. From front to back and top to bottom, the sheer scale of beauty will mesmerize you. Discover the Old Courthouse in St. Louis.

The tours and museum will offer any visitor, whether tourist or local resident, a guided overview of what the basilica has to offer as you learn more about the historic site. Through the museum, you’ll have a glimpse of the history and heritage of the breathtaking church, its events, and even community nearby. You’ll also learn some of the things that triggered its completion. With tours, visitors can also get to learn about the symbolism of the building’s elements whilst also learning about its rich heritage and history. Individuals, groups, and visitors are all welcome to come for tours or visit the museum to learn more about the origin of this place as well as how it earned its nickname: the “Rome of the West.”

Therefore, if you want a tour of the Cathedral Basilica you can arrange and visit between 7 am and 5 pm and you may have to make reservations. Self-guided tours require no reservations and you can decide to visit at any time within the hours of operation. Visitors are, however, advised to call in advance to inquire whether the church is available before they proceed with the tour, especially on the weekends, as they are often wedding ceremonies, Archdiocesan events, and several other activities that take place on the weekends. You can bring your children or family along to learn about its rich history and have a good time as family. Also, remember that you need a reservation if you are coming with a large group of individuals.

Driving directions to our office from Cathedral Basilica of St. Louis